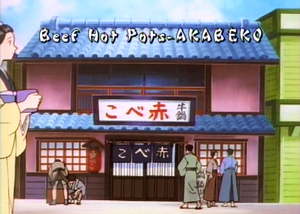 The Akabeko is a popular restaurant in Tokyo specializing in Sukiyaki beef and other "Western-style" dishes. It is owned by the Sekihara family and managed by the owner's daughter, Sekihara Tae. Other employees of the Akabeko include waitress Sanjō Tsubame and part-time errand boy Myōjin Yahiko.

As Tae is good friends with Kamiya Kaoru, the lodgers of the Kamiya Dojo often end up spending a great deal of time at the Akabeko and use it as a base of operations for many of their celebrations. Sagara Sanosuke is also a regular customer at the restaurant, though he is notorious for rarely (if ever) paying his bill.

In midsummer of 1878, due to its affiliation with Himura Kenshin and his friends, the Akabeko is struck by a shell from an Armstrong cannon fired from the nearby Mt. Ueno by Kujiranami Hyōgo and Yukishiro Enishi. The restaurant was badly damaged by the attack, but fortunately, no one was inside at the time. The damage was repaired and the restaurant continued to flourish, even adopting (in 1883) a maid-cafe-style.

Akabeko also has a twin restaurant in Kyoto called Shirobeko owned by the Sekihara family and managed by Tae's twin sister, Sae.

Retrieved from "https://kenshin.fandom.com/wiki/Akabeko?oldid=15722"
Community content is available under CC-BY-SA unless otherwise noted.