The Handsome Swordsman of Legend
A Man who Fights for Love

The Handsome Swordsman of Legend: A Man who Fights for Love

Tactics
The Handsome Swordsman of Legend: A Man who Fights for Love is the first episode of the Rurouni Kenshin anime, which introduces the Protagonist and Deuteragonist of the series, Himura Kenshin and Kamiya Kaoru, respectively.

The story begins with introducing the legendary Hitokiri Battōsai and how he was the most feared warrior in Japan during the Bakumatsu and disappeared afterwards. Kamiya Kaoru met Himura Kenshin on the nearby streets of Tokyo, whom she had mistakenly confused for a man running wild and killing people on the street, while claiming to be Battosai. After realizing that Kenshin is a Rurouni or wanderer, who wields a Sakabatō, i.e. reverse blade sword that is specifically designed for users not intending to kill, she is convinced that he is not really the "Battosai" she is trying to pursue.

The two of them then hear people screaming and Kaoru runs towards the action, in order to deal with the alleged Battosai. Kaoru suffers a shoulder injury during the encounter and just as the killer is about to finish her off, Kenshin rescues her and takes her to the Dojo, though she faints on the way. Kaoru wakes up in her room and sees Kenshin outside cooking breakfast, assisted by Oguni Ayame and Oguni Suzume, whom Kenshin mistakenly believes to be Kaoru's sisters. After having a taste of Kenshin's meal, Kaoru is surprised and says that his cooking is better than hers. Since Kenshin has nowhere to go, Kaoru requests that he stay with her at the Dojo, as thanks for having saved her life, to which Kenshin agrees.

While locked up in a room by Kaoru for walking in on her, while she was bathing, Kenshin asks Kaoru if any student at the Dojo had a dislocated left thumb like the killer. Kaoru reprimands him for even considering the idea that a Kamiya Kasshin-ryū student could do such things and says that she will do whatever is in her power to protect her father's style. Kenshin tells Kaoru that her father would never want her to protect his style, if it meant giving her life away, to which Kaoru simply says: "What does a Rurouni like you know?" and then walks away angrily. She later comes to apologize to him for having been so rude, but by then Kenshin has left and she regrets not having asked his name at least.

While sleeping, she has a flashback dream of a Kasshin-ryu student who was injured by her father, for violating the Kasshin-ryu's core principle of Katsujinken, i.e. the sword that gives life. She specifically remembers her father striking the student's left thumb, thus dislocating it.

The next morning she checks the records of all the Kasshin-ryu students and finds Hiruma Gohei, a student who was expelled from the Dojo and realizes that he is the one behind the murders. At that moment Gohei breaks into her Dojo with a bunch of his pupils in order to destroy the Dojo and kill Kaoru, in revenge for what his father had done to him. Just as he is about to kill Kaoru, the latter tells him that swords should be used to protect and not murder others, to which Gohei and his students laugh, saying that she should start by protecting herself.

At this point Kenshin breaks in and says that Kaoru's ideals are play talk for those who have never stained their hands and the truth is that swords are weapons designed for murder. However, right afterwards, he says that he prefers Kaoru's play talk over the truth and desires a world where her play talk can become the truth, which lights a smile on Kaoru's face. Gohei asks his men to kill Kenshin and make him suffer. Kenshin warns them to stay back to avoid being hurt, but they mock him and attack, resulting in all of them being badly defeated.

He then tells Gohei that Battosai practices neither Kasshin-ryu nor whatever style he uses, but practices Hiten Mitsurugi-ryū, a style that is sure to kill anyone unless used with a sword like his own, i.e. a Sakabato. Gohei then tries to attack Kenshin, saying that he's the only one worthy of the name Battosai, but Kenshin easily defeats him and dislocates his right fingers, rendering a complete end to his life as a swordsman, since now both his right and left hands are badly injured.

Kenshin then apologizes to Kaoru for hiding the fact that he is the Battosai and proceeds to leave. Kaoru tells him not to leave, because she needs his help to fix up the Dojo and bring in more students (since they'd all left, due to Gohei abusing the Kasshin-ryu name for murder), to which he says that if the real Battosai stayed, it would only bring her more trouble. She replies that she does not want the Battosai to stay, but the Rurouni to stay (although she stops at Rurouni, being unable to finish her sentence). She then tells Kenshin that he can leave if he wants but should at least tell her his real name. Kenshin does so and decides to stay, saying that a little rest from wandering would do him good. 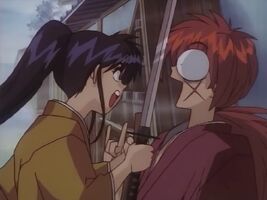 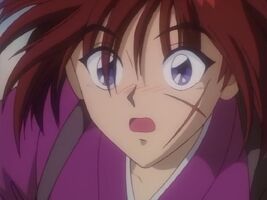 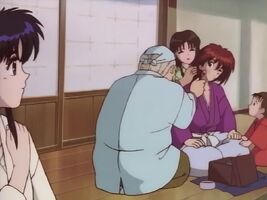 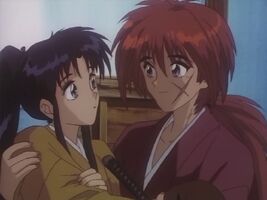 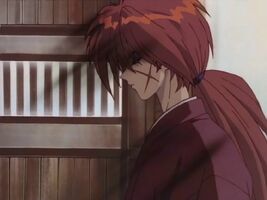 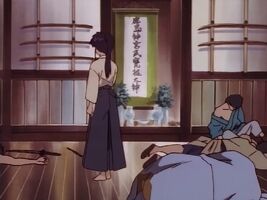 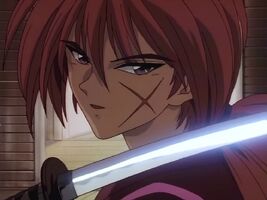 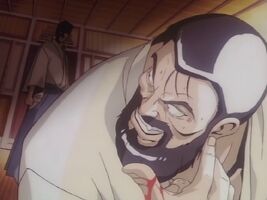