The Gatotsu () is a form of Hirazuki, which is a technique designed by the second in command of the Shinsengumi, Hijikata Toshizō.

According to dialogue in the Ruroken series, the Gatotsu is Saitō's invention, created to maximize destructive power whilst minimizing the user's exposure to strikes. However, due to the fact that the user runs straight ahead to perform a thrust with his left arm, there is a small blind spot that leaves the right side of his body exposed while the move is being performed. There are four variants of this move.

Saitō in the Isshiki stance for the Gatotsu. 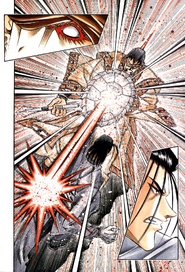 Saitō using Gatotsu Zeroshiki against Usui.
Add a photo to this gallery
Retrieved from "https://kenshin.fandom.com/wiki/Gatotsu?oldid=18231"
Community content is available under CC-BY-SA unless otherwise noted.