Tom Wyner (Bang Zoom!)
Richard Epcar (Sony)
Han'nya (?) is an Oniwabanshū Ninja, under the command of Shinomori Aoshi. His specialty is espionage and disguises. His fighting style makes use of steel gloves and horizontal stripes on his sleeves, as well as Wolverine-like hidden claws. The stripes create the illusion that his arms are shorter than they actually are, allowing him to hit master evaders such as Kenshin. He has crushed his cheek bones and removed his nose, lips, and ears, giving him a monstrous appearance. This is to allow him to "wear any face atop [his] own." He was defeated and spared by Kenshin after his "arm stretching spell" was figured out and his claws failed to land a blow. He was later gunned down by Takeda Kanryu while assisting Kenshin rescue Takani Megumi. His head is buried on a remote, dangerous mountain along with those of his comrades.

Han'nya always keeps his face hidden by a traditional hannya mask when not wearing a disguise. His actual face is disfigured, though for differing reasons in the manga and anime. In the manga, he purposefully disfigured his own face, making it as flat as possible so as to enable him to wear any facial disguise perfectly over his own.

In the anime, however, no reason is specifically given for his facial deformity, although when his mask does break, he states that he was involved in many hell-like battles all for the sake of the Oniwabanshū, suggesting that this may have been the underlying reason. Underneath the mask, he looks similar to the way he does in the Manga. His arms are either painted or tattooed with horizontal red and black stripes so as to give the illusion that they are shorter than they are when he is fighting. He wears a sleeveless blue shinobi outfit with a skin tight black hooded shirt underneath and gloves which conceal long metal claws, as well as his namesake mask, colored white with a red tongue and yellow teeth and horns. He appears to have no pupils.

Han'nya is described by Watsuki as "not really being a villain". He is very loyal to Aoshi as seen when giving his life to protect him. In combat, Han'nya is very honorable to his enemies, commending Himura Kenshin for his skill, when the latter defeated him. He also seemed to have a strong bond with Misao, as he appeared to her in a daydream, saying Aoshi would return to them.

Han'nya is described as adept at ninjutsu. He is able to provide Kenshin with a tough challenge, having learned all his skills from Aoshi. He fights with the claws in his gloves, which are usually kept hidden until he strikes. The unusual stripes on his arm are used for deception when he attacks - it makes his arms look longer than they really are when he strikes. Han'nya is second only to Aoshi, when it comes to power and skill level among the Tokyo Oniwabanshū. It is suggested in the manga that Han'nya may have taken some of the same muscle enhancer as Shikijō, as Shikijō claimed that if Sano took it, he could become as strong as Han'nya or himself.

Han'nya was born in an extremely poor village where there was scarcely any food, and so it was common for villagers to kill their own children to avoid starvation. He managed to evade this fate, but still was abandoned by his own parents and was left in the slums to rot. Aoshi took him in as his own pupil and raised him to be an elite ninja and spy, and for his duties Han'nya disfigured his face. Having learned kempo from Aoshi, he in turn taught it to Misao and left with his master and his three other subordinates for Tokyo in search of battles (leaving Misao with Okina).

Sometime before the events of the series, Aoshi became Kanryu's personal bodyguard and his Oniwaban subordinates in turn became his servants. Han'nya's voice is first heard when Aoshi notices he must have followed Kenshin and the others to the execution site of a pair of gangsters that Kanryu hired to capture Megumi, but he does not have a role until a bit later when Beshimi and Hyottoko are both defeated and he comes to their aid after Kenshin and Sanosuke defeated both of them. He manages to block a swing from Kenshin's swift sword, but Kenshin in turn uses the recoil of his counterattack to strike for his side, hurting his liver and leaving him unable to battle for a few days.

Han'nya later reappears disguised as an old man looking to sell trashy books and manages to take Megumi back to Kanryu. When Megumi shows up, she makes it clear that she has no intention of going along with his evil schemes and nearly kills him (Kanryu is saved by Han'nya's quick Ninjitsu skills). Han'nya is assigned by Aoshi to defend the frontline post, but is beaten by Kenshin, paving way for Sanosuke to fight and (barely) defeat Shikijo. All three later regain consciousness, and hearing the sound of gatling gun fire, both Shikijo and Han'nya fall before Kanryu's gun alongside their comrades Hyottoko and Beshimi in order to protect their master, Aoshi.

Having died, he makes no further appearances in person and Aoshi buries his head with his three fellows; he later appears before a day-dreaming Misao, addressing her as "Lady Misao" and informing her that the Battosai had kept his promise, and Aoshi would finally return to her.

Han'nya was based on Yamazaki Susumu who was the spy for the Shinsengumi.

Han'nya in the Manga series. 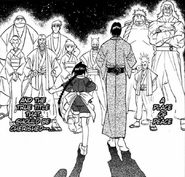 Makimachi Misao and Shinomori Aoshi leave Tokyo and the images of the Tokyo and Kyoto Oniwabanshu are shown.