Higashidani Kamishimoemon is a farmer living the province of Shinshū. He and his wife, Naname, had three children--Sanosuke, Uki and Ota. After Sanosuke left to join the Sekihō Army during the bakumatsu and his wife died, he continued to raise his two remaining children. When the farm began failing, his family wove and sold straw gasa hats for monetary support. When a greedy ex-wrestler schemes to steal the Higashidani farmland, Kamishimoemon begins a lengthy resistance against long odds--odds that become tipped in his favor when his firstborn wanders into town.

Kamishimoemon in the Manga series. 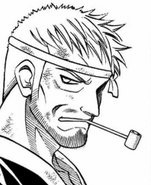 Kamishimoemon punches Sano in the face. 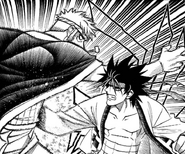 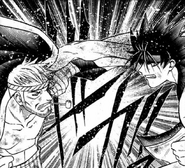 The two continue pummeling each other.

Sano makes it clear that he will allow no interference in his fight against Kamishimoemon.