Josh Keaton (Bang Zoom!)
Eliza Dushku (Bang Zoom!, child)
Joey Hood (Sony)
Himura Kenji ( ?) is the son of Kamiya Kaoru and Himura Kenshin who first appears in the last chapter of the manga as a young child. Although Kenji bears an uncanny resemblance to Kenshin, Kenji is more fond of his mother and less caring towards his father (he has a habit of pulling Kenshin's hair). His last manga appearance before the Hokkaido arc is in Yahiko no Sakabatō, where he is about four years old and is seen training.

In the Samurai X: Reflection OVA, Kenji is in his adolescence. By this time, Kenji is still very fond of his mother and visits her during her illness but has grown up harboring a fierce resentment towards his father, whom he believes neglected him and Kaoru.

Kenji would eventually leave for Kyoto to seek out Hiko Seijūrō XIII, hoping that he will teach him the Hiten Mitsurugi-ryū; believing that, by learning it, he would acquire strength like his father's during his days as Battōsai, and be able create his own legend. By this time, Myōjin Yahiko, current successor to the Kamiya Kasshin-ryū, has tracked down Kenji at the request of Kaoru. Kenji's obvious delusion of his father's greatness is put to the test in a duel against Yahiko. So, in a one final strike, Yahiko lets Kenji experience the full brunt of Kenshin's Sakabatō; allowing Kenji to 'experience' the 'strength' of his father's philosophy first hand. Falling to his knee, Yahiko presented Kenji with the Sakabatō as a late genpuku gift, hoping that now he would realize that Kenshin's strength lay not in his ability to kill, but in his appreciation of life, his devotion and self-sacrifice to those in need. In the end credits of the OVA, an older Kenji is seen with his lover, a young girl named Chizuru Raikouji who has black hair and cute looks (not unlike Kaoru).

In the last volume of the manga, the end notes describe young Kenji as an idiot, just like Iori. Kenji is also said to have inherited the skills of his parents and is a genius, being able to execute sword moves after seeing them once and is able to understand some points of Hiten Mitsurugi Ryu simply from hearing descriptions of it. His personality is said to be rather extreme, like most geniuses, being more twisted than Saitō and more arrogant than Shishio. In order to get back the Sakabato, he will become rivals with Yahiko and Tsubame's son.

Kenji with his mother and father. 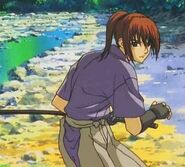 Kenji in his teens as he appears in Reflection, in the Battōjutsu stance, preparing to spar 25 year old Myōjin Yahiko.

Kenji in the Memorial Episode
Community content is available under CC-BY-SA unless otherwise noted.
Advertisement