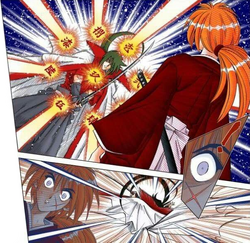 Hiten Mitsurugi-ryū is an ancient kenjutsu style from the Sengoku Jidai, developed to allow a single samurai to defeat numerous foes single-handedly, created by Hiko Seijūrō I. Rooted in the concept of ichi no tachi, or to strike in a single blow, practitioners of this style use a combination of immense speed and agility, battōjutsu, and acquired, observation-based pseudo-clairvoyance that permits a practitioner to anticipate an opponent's movements. Both offensive and defensive maneuvers are executed with minimal movement to increase a practitioner's ability to counter-attack and to conserve energy. As such, made with efficiency and spareness of exertion in the face of warfare scale battles yet with powerful and coordinated movements to easily fell threats in long and undetermined periods of time, it is among one of the strongest and oldest kenjutsu styles in Japan, once known as the signature style that defined Hiko Seijūrō The I as The Man Who Could Cut One Hundred In One Stroke.

The style commonly has the user keep one hand on the sheath at all times and stresses two-step attacks to ensure that the practitioner is never off guard while executing said attacks and allows the user to use the sheath as a shield to block attacks. Practitioners are also trained in honing their senses and to recognize movement, as well as to react in kind with their opponent's emotional disposition to efficiently fend them off accurately, a process in short that can be called "utilizing one's ki" or the internal way of the martial arts, allowing the practitioner to dynamically flow in turn with their opponent's own energy and use their own pace against them. Arguably, its most well-known trait is the surreal speed practitioners of this style use in battle (known as Shinsoku, or Godspeed), allowing the user to accelerate, maneuver, and strike at speeds most eyes are unable to properly follow. This allows the user to close considerable distance in seconds and strike down enemies before they can react. Despite each successor to this style becoming true masters of its teachings and skills, rarely have any of them be able to use this style to true perfection and bring out its full potential. Only Hiko Seijūrō I and XIII (and in the anime only Amakusa Shōgo) are able to surpass the normal limits of this style, such as going beyond god-speed without the need of battōjutsu strikes, letting them accelerate to speeds faster than the human eye can detect.

The techniques of Hiten Mitsurugi-ryū have only been held by a select few through the course of its entire history. In the face of its tremendous power as a style, this is due to its adherence to the strict yet responsible practice of isshi soden, which involves a single master training a single apprentice exclusively. This master-apprentice dynamic continues to point of succession in which the apprentice graduates into his mastery through a special rite of passage, in which they inherit the style's secret technique (ōgi) and the mantle of "Hiko Seijūrō". This process, however, results in the death of the current master at the hands of the apprentice who must use of the this secret technique - Amakakeru Ryū no Hirameki - against them. Succession also awards the newly-appointed master an heirloom mantle which acts as the certification of mastery. This special mantle is also weighted which enables the master to continuously train their strength when worn, even with everyday activities.

Due to its tremendous power and speed, Hiten Mitsurugi-ryū has been nicknamed "The Black Ship of the Land" in that it would almost certainly secure absolute victory for whichever side might wield it in a conflict. In light of this probability, the practitioners of Hiten Mitsurugi-ryū have historically maintained the independence of any and all political entities, stressing highly the importance of wielding its expertise in the name of their fellow man rather than serving any political, governmenatal or institutional body. Under this duty, all generations of practitioners receive a great deal of insight regarding the human condition from the school's teachings. This includes instruction regarding the relativism of morality and the idea that perceptions of good and evil are not absolute; a potentially "good" human being can have any number of beliefs that may not mesh with those of the practitioner without necessarily being wrong. Other core tenets of the style include the idea the art of swordsmanship ultimately amounts to nothing more than a way to kill other human beings, regardless of the practitioner's intentions or beliefs, and that the Hiten Mitsurugi-ryū should never be used to improve a practitioner's social standing, acquire wealth, or obtain political power. Finally, while heirs are encouraged to protect the innocent, the defenseless, and less fortunate, the Hiten Mitsurugi school encourages its users to understand even foes to garner accurate judgement and resolve conflict with mercy and the least amount of violence, while in more extreme cases, ultimately permits its practitioners to execute individuals whom they deem to be truly deserving of death.

As powerful as it may be, Hiten Mitsurugi-ryū can also be detrimental to its practitioners. Medically speaking, the physical demands for Hiten Mitsurugi are tremendous. For anyone ill-equipped, such as Himura Kenshin, simply employing their techniques causes cumulative, physical damage to their body. According to the physician Takani Megumi, the style is essentially a "superman's sword art", requiring someone with an incredibly athletic body to use effectively in the long term. Normally, the training provided during apprenticeship enables a practitioner to condition themselves properly.

In turn, Hiko Seijūrō XIII is an example of the necessary conditioning for practitioners of the style to perform without incurring the cumulative trauma from regular usage, having developed an extraordinarily resilient physique with an incredible musculature over years in tenure as a Hiten Mitsurugi master proper. Himura Kenshin, by comparison, having left his training early, stunted his body's development resulting in a leaner, more fragile frame which culminated into progressive issues after mastering the Amakakeru Ryū no Hirameki. After using the technique only six times, he caused irreparable damage to his muscle tissue, decimating the agility and speed needed to exercise the more advanced techniques of the Hiten Mitsurugi. Furthermore, due to the immense stress imposed on the body, along with one not having the proper physique necessary to use the sword style to its fullest in the long run, continuous use can result in the user eventually being crippled and eventually no longer capable of using the style without it posing a risk to their life.

But, with proper and regular training, the style serves as a veritable "fountain of youth" enabling practitioners to suppress the ageing process. Kenshin, for instance, at nearly thirty years old, looks almost no different from the way he looked while in his late teens and his master, Hiko Seijūrō XIII, is 43 years old but looks exactly the same as he did when he was in his mid-twenties.

Though its form is that of any other Battōjutsu strike, the Amakakeru Ryū no Hirameki differs in that - while a normal strike is performed by drawing the katana from its sheath on one side while stepping forward with the opposite foot, using a single step, this strike adds yet another step (a second step) mid-draw with the foot adjacent to the sheath (creating a Stutter-Step) which momentarily creates an instantaneous acceleration to the forward-charge as well as the sword draw. Meanwhile, the range of the attack is increased and the timing of the attack changes slightly, which can throw off the opponent.

Although truly, a super-sword attack, it endangers the user by possibly putting the adjacent leg into the free sword's path and draws one even closer to an opponent's sword than usual, but on the other hand, boosts the speed of the sword draw to beyond-Godspeed and even greater is the boost in force of the strike. By realizing one's insignificance and risking life and limb to protect something else while, at the same time, taking one's own, fragile human life into consideration, the user is able to step into the small margin behind one's own drawn sword and in front of the sword of one's opponent without fail, delivering a beyond-godspeed blow of monstrous power.

Additionally, like other Battōjutsu moves of Hiten Mitsurugi-ryū, Amakakeru Ryū no Hirameki is a two-step move and, if its secret should be anticipated and the strike itself blocked or dodged, the second step comes immediately into effect. The immense force of the enhanced draw cuts the air in front of it and creates a powerful vacuum in its wake as the deflected air rushes back into place. Any opponent able to deflect or dodge the first swing will automatically be subject to this vacuum and inexorably pulled closer to the user, all the while this vacuum creates intense winds powerful enough to overwhelm and catch their opponents off balance. With the great amount of force being applied to the Amakakeru Ryū no Hirameki, a missed swing leads naturally into an accelerated spin of such centripetal force akin to the Ryūkansen. The added momentum of the spin in addition to the pulling force of the vacuum on both side results in a second strike that greatly dwarfs the first in power. This is best explained to Kaoru by Hiko Seijūrō XIII: "Even if you avoid the fangs of the flying dragon the gusting winds strip away the freedom of movement and the claws would rip you apart".

Although the Amakakeru Ryū no Hirameki is one of the most powerful and profound attacks of the series, to learn such a technique is not without its weaknesses, cost and consequence. Those who learn the ways of Hiten Mitsurugi-ryū, and walks its path long enough to learn this technique, must undergo a final test, to be pitted against their master's unrestrained Kuzuryūsen, placing them in a true life or death situation. Faced with life or death, the student must perform the Amakakeru Ryū no Hirameki without flaw, being the only attack in the repertoire of Hiten Mitsurugi that surpasses the Kuzuryūsen in speed and execution- else the apprentice fails and is ultimately slain for naught. Should they succeed, they will have mastered both this technique, and how it is a testament, the entire style of Hiten Mitsurugi itself, but at the cost of the preceding master's life.

While the attack is incredibly powerful and seemingly undefeatable, the basis of Amakakeru Ryū no Hirameki, the fighter's will to live and compassion for others allowing them to stand on the edge of life or death, must be strong, free, and unwavering of any doubt and turmoil that lies in the heart of the user. This state of mind is the only condition that will allow the Amakakeru Ryū no Hirameki to be executed flawlessly and guarantee their victory, as being out of this state only allows the user to execute lesser and flawed versions of the ultimate technique (as is the case when Kenshin faces Yukishiro Enishi and his Amakakeru Ryū no Hirameki fails for the first and only time against the Watōjutsu ōgi Kufuku Zettousei).

In the manga, it was stated the Amakakeru Ryū no Hirameki can kill even when wielding a sakabatō. However, this was only implied in the anime by Seijurō while offering an explanation as to why he didn't die from the blow delivered by Kenshin.

In the live-action, the added step is capable of launching Kenshin into the air towards a leaping opponent.

An improvised version of the Hiten Mitsurugi-ryū, used with an umbrella when Kenshin and the group were entertaining a large crowd to help Marimo prepare for her cannon launch main act against the Sumidaya entertaining group. Comedic and humorously entertaining in its style, yet as effective as the real art, the Secret Dance of the Umbrella is also likely used to provide a front to maintain the secrecy of Hiten Mitsurugi-ryū's real repertoire with a deal of humility.