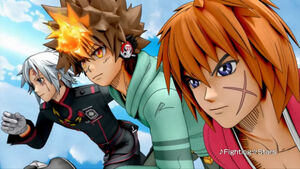 J-Stars Victory Vs (originally titled as Project Versus J) is a crossover video game by Namco Bandai Games for PlayStation 3 and PlayStation Vita. It is the follow-up to Jump Super Stars and Jump Ultimate Stars (which were released for the Nintendo DS).

The game was first announced in December 2012, in the second 2013 issue of Weekly Shōnen Jump. It was made to commemorate the 45th anniversary of Shōnen Jump, and it is presented as the "ultimate Jump game". The game was released in Japan on March 19, 2014, and was later released in Europe and North America in June 2015. This marked it as the first Jump Stars game to be released outside of Japan, as well as the first internationally-released video game to feature Rurouni Kenshin characters.

The game allows for a maximum of four players to duke it out in a 3D environment, either in a Battle Royale situation or in teams of two combatants.

By using different techniques, the player can lead his team to victory. Learning each character's different power, range, and effects is the first step towards being unbeatable.

Characters making a cameo in the game as either attacks, in the background, etc.

Retrieved from "https://kenshin.fandom.com/wiki/J-Stars_Victory_Vs?oldid=17871"
Community content is available under CC-BY-SA unless otherwise noted.