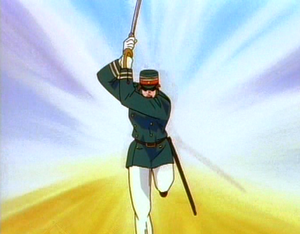 Jigen-ryū (示現流 lit: revealed reality) is a traditional kenjutsu and martial arts style developed in the Satsuma region of Japan in the late 16th century. It is famous for emphasizing the importance of the first strike with a long sword, often not even giving thought to a second strike.

The user of the technique holds his sword in the Dragonfly Stance (蜻蛉構) with the sword positioned vertically above the right shoulder before running forward at his opponent and then cutting diagonally down on their neck in the Kesagiri position while delivering a loud kiai (traditionally, "Ei!").

It is said that students of this style practice Jigen-ryū by striking a vertical pole or tree with a bōken or jō. At the peak of its popularity, Jigen-ryū practitioners were said to practice the strike three thousand times each morning and another eight thousand times each afternoon. During a hard practice, the wood is said to give off the smell of smoke.

The famous soldiers of Satsuma who joined the ranks of the Ishin Shishi during the Bakumatsu were often schooled in Jigen-ryū and made it notorious in combat. Lt. Ujiki of the Tokyo Police Sword Corps used this style in a skirmish against Himura Kenshin, but was soundly defeated by Himura's Hiten Mitsurugi-ryū.

Retrieved from "https://kenshin.fandom.com/wiki/Jigen-ry%C5%AB?oldid=6625"
Community content is available under CC-BY-SA unless otherwise noted.