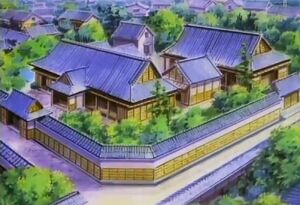 The Kamiya dōjō (also known as the Kamiya Kasshin-ryū dōjō) is a fairly-sized, hereditary kenjutsu dōjō and residence in Tokyo owned by the Kamiya family. Its ownership goes back at least three generations to the father of Kamiya Koshijiro, who used it as a base of operations for his kenjutsu school as well as his interest in ink painting. The school was passed on to Koshijiro, who used to found the kenjutsu style of Kamiya Kasshin-ryū, but when Koshijiro was drafted into the Seinan wars, the ownership of the dōjō fell to his young but talented daughter Kamiya Kaoru. Though membership in the dōjō has fallen significantly since its peak, after the rurouni Himura Kenshin took up residence there with Kaoru, it serves as home and gathering point for various members of the group calling themselves unofficially the Kenshin-gumi. As such, it is the scene of many of the series' events and has sustained repeated damage from various threats including the Hishimanji Guren Gang, the Oniwabanshū, Shinko-ryū, Saitō Hajime and the Six Comrades.

Retrieved from "https://kenshin.fandom.com/wiki/Kamiya_D%C5%8Dj%C5%8D?oldid=16068"
Community content is available under CC-BY-SA unless otherwise noted.