Kashiwazaki Nenji, commonly referred to by his old shinobi name Okina, is an elder member of the Oniwabanshū. During the Bakumatsu, he commanded the Kyoto Oniwabanshū in their endeavors to keep tabs on the revolutionary mayhem escalating in the city, and when the Edo period ended, Okina spearheaded the transition of the Kyoto headquarters into a safehouse and escape route for his defeated comrades. As a result, he becomes the primary caretaker of Makimachi Misao after Shinomori Aoshi departs for Tokyo.

He is a misleadingly old man whose benevolent appearance of a simple merchant belies his still formidable speed, strength, and endurance.

It was noted in the manga by Misao - who once saw him in the bath - that his penis is smaller than Kamatari's.

Kashiwazaki Nenji, or known by his associates as Okina, is an easy going elderly figure in the Oniwabanshu's ranks. With a gentle yet excitable spirit, Okina shows a love for life (and women) and even spirit for parties and celebrations when the chances arrive. He was considered the eventual successor to the Okashira, but he gave way to the younger Aoshi for the sake of the new age, which shows that he has a flexible way of thinking.

Despite his gentle demeanor, he not without his hidden depths. In times of adverse and serious tone, he is stern and intense. Devoted to his comrades, he is with a great deal of loyalty and honor to them, and to those that deceive such noble traits of his find themselves subject to his ferocity and just fury. In the days of his prime, Okina was once infamously known as the most frightening figure of the Oniwabanshu, freely carrying out horrific tortures on adversaries and suspects; in situations when push comes to shove, he is not hesitant to return to such measures that earned his terrifying reputation.

In the days of the Bakumatsu, when the Oniwabanshu was still active under the Tokugawa Shougunate, Okina proved to be a promising ninja of the group, but gave leadership to the up and rising Aoshi after having properly defeated his former Okashira. Having given the leader's role of managing the missions and protection of Edo Castle to Aoshi, Kyoto was soon to be seen as the prominent site of turbulence and activity in the age, and Okina headed the new branch there to oversee the Japanese Capitol.

As the Aoiya opened to be the Oniwabanshu Kyoto branch, ironically, those of Edo Castle folded before they did, and over time, the branch became a well known ryokan in Kyoto to serve as a headquarters and establishment for the out of work Oniwaban ninjas. Into the Meiji, the only ninjas of the Aoiya would come to be Misao, Shirojo, Kurojo, Omine, and Masukame. Though the inn peacefully serves the city of Kyoto in daily life, Okina still remains alert and well informed of important figures of the era and happenings within the underbelly of society, with much credit to the many ties to other former Oniwabanshu establishments and hidden eyes throughout the nation. As the caretaker and trainer of the former okashira's granddaughter Misao, he and the Aoiya staff make a silent vow to not tell of Aoshi's location and the fate of the Tokyo Oniwabanshu out of her innocence and well being since their departure years ago.

When word reaches of the survival and resurfacing of Shishio Makoto and his dark ambitions, it is not without surprise that the news reaches the ears of Okina. With the arrival of the only man known who could possibly stop him lead by his ward Misao, Okina is happy to help Kenshin Himura stop the impending threat to the newfound peace in the nation. Welcomed into the comforts of the Aoiya, Kenshin however told word of the massacre of former Oniwabanshu in Tokyo and the survival of their group's leader, Aoshi Shinomori. Despite bitter truths, Okina was still spirited in aiding Kenshin and protecting Kyoto from whatever would come of the situation, and came find two people of importance for Kenshin, Arai Shakkū and Hiko Seijūrō XIII.

Accompanying him to Arai Seikū, the son of infamous and prodigal swordsmith Arai Shakkū, he played an instrumental part in consoling the new generation blacksmith of Himura's pure intentions and his need for his father's last works.

As Himura made way to his teacher and guardian Hiko Seijūrō XIII, and in the anime, greets and fills in the events for the newly arrived Kaoru and Yahiko, Okina receives a message delivered secondhand to him by Aoshi. Meeting up with him in Kyoto's merchant's and festivity district, knowing of Aoshi's grave loss of his comrades in the Kanryu incident and his vendetta to claim Kenshin's life that borders on near madness, Okina comes to remind the okashira of the Oniwanbanshu that he mustn't lose the honor which they stand for and discontinue of his path of blind fury- Or else he would take responsibility and strike him down. Later that week, having caught assailants in the night come to silence them in the Aoiya, Okina's torturing and interrogation of the gang's leader came to what he feared the most- Aoshi had turned to the side of Shishio's forces to locate where Kenshin had now resided in Kyoto.

Sending off the brutally tortured enemy and a messaged strapped to the pawn back to his superiors, Okina armed and set himself up at an Oniwabanshu known stronghold. With no other choice left to him, Okina was to enforce his threat to the now defected Aoshi and ultimately put him out of his misery. Much to his surprise and to the advantage of his steel tonfa against blades however, Aoshi's absence saw him display greater aptitude that he had gained in ascetic training taken in that time after his crippling defeat, having developed an aptitude that had surpassed the former okashira's skills in the Kodachi Nitou Ryuu art. Slicing apart one of Okina's full steel made tonfa with the impressive Onmyo Kosa, Aoshi offered his old ally with a final warning to reveal the location of Himura for his life, but Okina's will refused to submit to a man that had betrayed his allies- and to betray the ally who was Japan's only hope against the tyrannical underworld warlord was not even an idea to consider.

Although Okina held his ground and proved difficulty to overcome against the wayward Okashira and to the rescue by Misao, it was the onslaught of the Kaiten Kenbu Rokuren that saw his fall in battle. Left with over numbers of injuries and wounds, and though treated, Okina fell into a deep coma. With a will that should have been opened in anticipation of his defeat in battle, Okina thereby proclaimed the disbanding of the Kyoto Oniwabanshu and desired Misao to live a life of peace away from the life of a ninja- But Misao would not have any of it and would take on the new role of Okashira, as the Oniwabanshu was the only family she knew dear to her all her life.

Deep in rest and a state of unconscious stasis, Okina was absent for all of the events of the Kyoto Grand Fire and the maiden voyage of Shishio's Blackship Purgatory. Upon the prevention of the diabolical plans for conquest and the success of the Kenshingumi and Oniwabanshu, Okina regained consciousness.

Having recovered to a moderate state of good health, Okina desired to have a word with Kenshin and a most urgent request. Having experienced firsthand of Aoshi's state of blind obsession with being the strongest and state of vengeance twisting him far from the man he once was, Okina requested Kenshin to fulfill the act of putting Aoshi to rest in death, even if it meant breaking his vows to never kill again. In light of this, Kenshin politely refused, stating that if Aoshi really did truly turn to being a man purely of chaotic ambition, Okina would have not survived the duel between them, and thus, made his own promise to bring Aoshi back from his obsession back into the hands of the Oniwabanshu which he belonged. Before he could even politely make Kenshin reconsider, he saw the tears of relief and grievance which Misao cried upon his promise to keep. Realizing his former promise would have brought upon Misao unimaginable sorrow with what could have unfolded, Okina posthumously reflected upon his age, and commended Kenshin with the promise he would follow the next day upon their duel at Shishio's stronghold.

Though the day seemed peaceful, the following day would not see that the battle would be all at Mount Hiei. With a standing force of over 400 and all lead by three of Shishio's Juppongatana, an ambush was brought to the Aoiya. Though the mob was only there to ensure no escape from the duels between the three fighters, and not able to fight due to his injuries, Okina was the strategic mastermind and support from the sidelines of the Oniwabanshu and the Kamiya Kasshin-ryū.

With the end of the battle and day seeing a major demolishing of the Aoiya after the duel of Fuji and Hiko Seijuro XIII, the Kenshingumi grasped a grand yet narrowly won victory against Shishio's forces. After estimating the damage of the duel done to the Aoiya, Okina and the group came to stay and rambunctiously celebrate during the weeks of reconstruction of the "New and Improved Aoiya" at the Shirobeko. After Kenshin's full recovery and awakening from his coma with his battle against Shishio, Okina hoped to undergo a full no expenses paid getaway celebratory vacation and tour of Kyoto to ease the Rurouni's pains that rooted deeply in the former capitol city- But didn't go as planned with the Kenshingumi having their own affairs to take care of. Gracious and thankful for the help and hospitality that Okina and the staff of the Aoiya provided all throughout the conflict and troubles in Kyoto, Kenshin, Kaoru, Sanosuke, Megumi, and Yahiko left the homely Aoiya back home for Tokyo. With Aoshi back at home and in a monastic stay at a Zen temple to console the troubles within himself, the staff of the Aoiya would see peaceful days for a while now.

His weapon of choice is a set of twin steel tonfa.

Veteran Japanese actor Min Tanaka was set to played him. While he survives the wounds Aoshi inflicts on him in the manga/anime (as well as surviving as a whole), he dies of his wounds in the third movie. 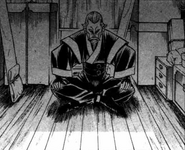 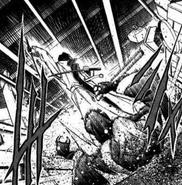 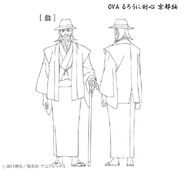 Add a photo to this gallery
Retrieved from "https://kenshin.fandom.com/wiki/Kashiwazaki_Nenji?oldid=18132"
Community content is available under CC-BY-SA unless otherwise noted.