Tetsuya Iwanaga
The second son of a shōgun retainer, Kiyosato Akira was the childhood friend and fiancé of Yukishiro Tomoe. Fearing that his own meager position would not be enough to impressa his betrothed, Akira postponed the wedding and left Edo for Kyoto to join the Mimawarigumi, where he became a bodyguard for the high-ranking samurai Shigekura Jūbei. But in the first year of Genji (1864), after a night of drinking with Shigekura and fellow bodyguard Ishiji, Akira came face-to-face with the infamous Ishin Shishi hitokiri Himura Battōsai. After slaying Ishiji and Shigekura, Battōsai turned his bloodied sword on Akira, who struggled valiantly enough to leave a deep and lasting cut on Battōsai's face but was ultimately cut down himself. Bleeding out, Akira wept over his lost future with Tomoe as he tried to get to safety, but was stopped by the hitokiri's killing blow, Battōsai would go on to both commend Akira's will to live and pray that the young man would find happiness in his next life.

Akira appreared in a flashback of Kenshin's past in the live action movie where he was played by Kubota Masataka. 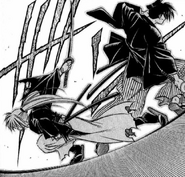 ... and relieves him of his pain.
Community content is available under CC-BY-SA unless otherwise noted.
Advertisement