Wendee Lee (Bang Zoom!)
Ellyn Stern (Sony)
Komagata Yumi was a close follower, and also lover, of Shishio Makoto and one of the more loyal members of the Juppongatana. She nearly always appeared by her beloved's side, even after his death.

Yumi is a slender, yet voluptuous woman with black hair (dark red in the anime) pinned in a bun, light brown eyes, and a small beauty mark under the left side of her lower lip. She wears a low-cut red kimono (red in the anime, white in the OVA 5) which hangs loosely over her upper arms, exposing her decolletage. Particularly well-groomed and made up, Yumi wears heavy eye shadow and bright lipstick (red in the manga, green in the anime). In the live action film she appears wearing a blouse.

Yumi is calm and at times lightly promiscuous. She is shown to be deeply in love with Shishio, calling him Shishio-sama affectionately. She seems to base all of her opinions on what Shishio's are, shown by how she talks to Kenshin and his friends. She is concerned with Shishio's well-being, seen when she is worried that he will fight for too long. She is also shown to care more about a person's character than their appearance, given her love for Shishio despite his burned and mutilated physical appearance, as well as her care for Sojiro instead of seeing him as just a pawn. Even though she was committed to helping Shishio take over Japan, she supported Sojiro's decision to leave the faction, believing it would be best for him even though he was the second most powerful member behind Shishio. This shows a deep side to Yumi's personality, likely stemming from people's judgement regarding her former occupation as a prostitute.

A very intelligent woman and former high-class courtesan, Yumi is quite knowledgeable in regards to international affairs and modern discourse. Though entirely clueless when it comes to swords and swordsmanship, she has demonstrated the ability to operate modern Western machines such as the telegraph and seems to be the chief monitor of Shishio's medical condition,changing his bandages regularly and also keeping track of his rising body temperature. In addition to this, she presumably has all the skills known to courtly women of the Tokugawa age.

After her family was killed by Shishio, she was taken and became a very prominent and popular Oiran of Yoshiwara. Before the days of the bakumatsu, Komagata Yumi enjoyed great wealth and fame among Tokugawa-era courtesans. However, after the Maria-Luz Incident when the Japanese government took the official stance that courtesans and prostitutes were considered no better than cattle, Yumi angrily left her profession and took up with Makoto Shishio.

Designed as a "sexy accessory" for Shishio, Watsuki did not develop her love-motivated personality until later on. Her being sent to hell upon her death was met with fan letters of both praise and criticism.

Maryjun Takahashi has been cast as Komagata Yumi in the 2014 live-action Rurouni Kenshin films and the trailer shows Hōji and herself, holding Kaoru as their hostage.

In the beginning of the film, Yumi was present along with Hōji and Sojiro to witness Shisho's warning to Saitō when he caused Saitō's colleagues to burn to death right in front of Saitō.

Her outfit is considerably more modest in the film, mostly because, as cosplayers found out to their dismay, her manga look is all but possible in real life. 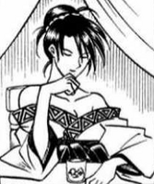 Yumi in the Manga series. 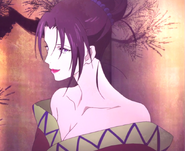