A young boy from Shingetsu Village, a town abandoned by the Meiji Government to the machinations of Shishio Makoto and brutally ruled over by Shishio's henchman Senkaku, Mishima Eiji escapes the village in the arms of his older brother Ei'ichirō before the latter succumbs to fatal injuries sustained during the flight. Coming across Himura Kenshin and Makimachi Misao in the forest, Eiji is escorted back to his home village in order to free the people from Shishio's influence.

Eiji is a young boy with short scruffy brown hair and fierce brown eyes, is of a slim build, and has a hard look on his face as a result of his past trauma.

A young boy, Eiji is brave, passionate and naive, and after the death of his parents and older brother, slightly unhinged. Having grown up in Shingetsu village, Eiji is shown to have little knowledge of the world outside his home, evidenced by his not knowing that killing in revenge had been outlawed in the sixth year of the Meiji era. Despite his youthful brashness, Eiji is also very brave, willing to fight opponents who are unbelievably more skilled and experienced than him. He also shows a strong sense of loyalty and attachment to his family, being devastated by the deaths of his brother and parents as well as horror at the desecration of his parents' corpses. He is also shown to be compassionate and understanding, forgiving his fellow villagers for allowing his parents' desecration and ousting him from Shigetsu village due to their cowardice, instead he wishes them well.

Eiji made a brief appearance in the second part of the live-action film. 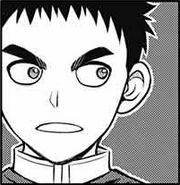 Mishima Eiji at 17 years old
Add a photo to this gallery
Retrieved from "https://kenshin.fandom.com/wiki/Mishima_Eiji?oldid=16505"
Community content is available under CC-BY-SA unless otherwise noted.