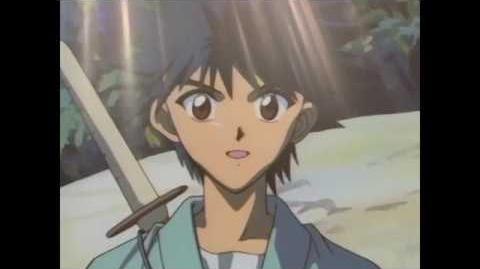 Wendee Lee (Bang Zoom!)
Brianne Siddall (Sony)
Derek Wade (Reflections OVA)
Blake Shepard (New Kyoto Arc)
Myōjin Yahiko ( ?) was the only son of a low-ranking samurai family but was orphaned during the early years of the Meiji era when his already low-income family fell on hard times. Having no one else to turn to, Yahiko was made a pickpocket in the Tanishi yakuza, to whom his late parents owed a considerable sum of money. However, in early 1878, young Yahiko met and was rescued by the swordsman Himura Kenshin, who freed him from his debt to Tanishi and brought him to live at the Kamiya Dōjō, where the boy could hone his strength and restore his pride by studying kenjutsu. Though still a boy, Yahiko slowly becomes a competent swordsman in Kamiya Kasshin-ryū and eventually one of Kenshin's most trustworthy allies. By the end of the series, Yahiko was the only member of Kenshin's team to not leave due to his strong family bond with both Kaoru and Kenshin.

Despite being shorter than average for the age of ten, Yahiko's appearance boasts of the defiant demeanor within with his rebellious "cat-like" brown eyes and shock of spikily unkempt black hair. He usually wears a green haori patterned with several sets of short, twin parallel lines and a white long-sleeved shirt underneath, as well as a dark hakama (sometimes white with dark vertical stripes) and standard white tabi and zori. In the anime, his haori is always yellow or tan, and the hakama is dark green; additionally, the anime version of Yahiko has a markedly tanned complexion. When out of the dojo, Yahiko also wears his shinai tied across his back for easy access.

At 15, Yahiko has grown noticeably taller with a longer, more mature face, though his eyes and hair remain the same. He has switched his green haori for a dark blue one with sets of twin parallel blue lines along the white trim (in deference to his old outfit) and kanji character aku (悪), which means "evil" in English, emblazoned on the back of the collar (in deference to Sanosuke's symbol). He also wears a white hakama, white undershirt and blue wristbands.

In the 20th volume of the Rurouni Kenshin kazenban edition, Watsuki redesigned of Yahiko's appearance to show how he would appear at that time. His hair was not as spiky as it was originally, and he had new clothes. He wore a dark jacket, a white short-sleeved t-shirt and short trousers. He did not have socks under his sandals, and he had sarashi on his hands to offer a better sword grip. In the redesign, he also carried two swords - his shinai and the Sakabatō - with the latter tied on his back.

Even at the tender age of ten, Yahiko is a short-tempered, violent, bad-mannered and foul-mouthed young man. But, above all else, he is proud--proud of his samurai lineage. Taught cynicism and rebelliousness by the mean streets of Tokyo and schooled in thievery by the yakuza after his parents' deaths, Yahiko is nonetheless driven by his pride to avoid taking actions that would bring shame to his family name and reviles his days as a lowly pickpocket.

Angrily rejecting the pity and charity of others, Yahiko strives to fix his problems with his own hands and suffers greatly when it appears that his strength is not significant enough to protect his ideals. As such, he quickly becomes obsessed with kenjutsu, training diligently to become strong enough that he needn't rely on anyone else's power. As he grows stronger and stronger under the guidance of the katsujinken philosophy, Yahiko also becomes driven by his samurai pride to take up his sword for the protection of the precious people around him. He frequently puts his own life in jeopardy to protect others and prove to himself that he is becoming stronger. When his friends have been wronged, he rushes headlong into the fray to enact revenge and see justice done. He also takes swordsmanship seriously, despising it when others use their swordsmanship to abuse those weaker than them and also becomes disgusted when students practicing swordsmanship rely on others to help them. He also follows the rule of never using a sword to kill, due to the teachings of Kaoru and Kenshin.

Despite his rude countenance and admittedly limited intelligence, Yahiko is also quite astute, being able to see inconsistencies and discrepancies in the words and actions of other people and point them out bluntly.

Despite his young age and his short time of training, as the series continues Kenshin allows Yahiko to fight with him, noting that he is too mature for his age. Though he often overestimates himself, Yahiko can defeat several enemies. In time Yahiko becomes a master swordsman; he grows into a level-headed, contemplative, and caring young man.

On an interesting note, in the anime, he seems slightly more interested in girls than in the manga. In the anime episode 12, how he meets Tsubame is different. She helps tie his broken sandal, and he seems smitten at first sight with her and even gives her flowers in episode 66. Still, in the manga he initially had no interest in her, having seen her as a coworker at the Akabeko where he was working temporarily to earn money to buy a sakabato. He also developed a crush on a girl named Marimo in episode 17.

All but raised by the Tanishiyakuza, Yahiko developed extraordinary pickpocketing skills in his youth. His sleight of hand is so great that he manages to steal Kenshin's wallet during their first encounter without the former assassin appearing to notice. Though Yahiko abhors his criminal past and attempts to distance himself from it, this ability proves useful several times during the series.

However, Yahiko shows an even greater aptitude for kenjutsu under Kaoru's tutelage. Though his training starts slowly, Yahiko develops a talent for the art, grasping central concepts unusually quickly and applying them in actual combat situations as danger springs up around the Kenshin-gumi. In as little as six months, Yahiko advances from a novice to a level his astonished sensei equates with being "the strongest child swordsman in Japan". With his keen eye and talent for swordsmanship, Yahiko becomes able to deconstruct the basis of specific attacks and twist them to suit his style without compromising their efficiency, even managing to mimic certain moves of the Hiten Mitsurugi-ryū without instruction and master the Hadome and Hawatari techniques of Kamiya Kasshin-ryū to the extent that they become his signature.

By the age of fifteen, Yahiko has become a national champion level swordsman feared and revered in Tokyo as "The Catcher of a Thousand Blades" and at that time he is a master of the Kamiya Kasshin-ryū, with the feat of stopping the first five attacks from Kenshin's Kuzuryūsen technique.

Myōjin Yahiko was born in the second year of the Meiji era to a poor samurai family in possession of only three acres of land and two servants. However, the boy would never know his father, who joined the pro-bakufu Shōgitai and was killed during the Battle of Ueno in the Boshin War, seven months before his son's birth. As a result, Yahiko was raised by his mother, who was unable to retain hold of her late husband's land and title and was forced to sell her body in a brothel to feed her son. But she, too, died after contracting syphilis, leaving Yahiko an orphan. Facing starvation on the streets, Yahiko was taken in by the Tanishi yakuza of downtown Tokyo and schooled rather thoroughly in the ways of pickpocketing to repay Tanishi for his houseroom. However, between the shame of becoming a common criminal and the abuse he suffered at the hands of Tanishi's men, Yahiko quickly soured on his life as a thief.

In the early Spring of 1878, the eleventh year of Meiji, Yahiko encountered and attempted to steal from Himura Kenshin. Moved by Kenshin's compassion and courtesy, Yahiko makes up his mind to sever ties with the Tanishi yakuza. However, Tanishi is unwilling to let Yahiko leave until Kenshin intervenes once more, defeating the yakuza's enforcers and impressing the aging gangster with his intensity. Though glad to have finally been freed, Yahiko weeps bitter tears over his weakness and wishes that he'd had the strength to fend for himself. Taking care not to harm the boy's significant pride, Kenshin takes Yahiko to the Kamiya Dōjō to learn kenjutsu from Kamiya Kaoru.

Taketo Tanaka plays him in the 2012 movie, where he was already a student of Kaoru's Dojo by the time of Kenshin's arrival. Due to Tanaka being a teenager, he was replaced by Kaito Oyagi in sequels.

Yahiko in the anime series

Yahiko apologizes to Kenshin for stealing his Sakabatō

To rescue Kaoru from Enishi at an island 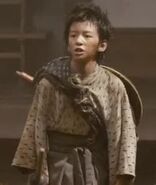 Yahiko in the first live-action movie, played by Taketo Tanaka. 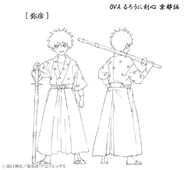