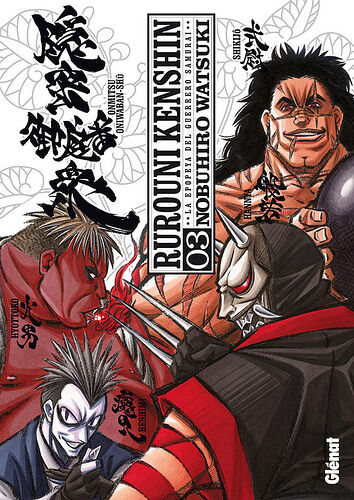 The Oniwabanshū (お庭番衆, Garden-keepers) are an elite cadre of onmitsu who were established at Edo Castle by the 8th Tokugawa shogun, Tokugawa Yoshimune, in the early 18th century. Rumored to have been quartered in the garden of Edo Castle (hence the name), Yoshimune had tasked the Oniwabanshū with covertly gathering information on various daimyō and statesmen of the bakufu, as well as providing security for the castle itself.

After the bakumatsu (during which the Oniwabanshū were ordered to guard Edo Castle instead of participate in the fighting in Kyoto), the organization has dwindled in the absence of the bakufu and, headed by the genius Okashira Shinomori Aoshi, the remaining onmitsu have split into two groups--one maintaining an intelligence headquarters in Kyoto and the other acting as mercenaries in Tokyo.

At the time of their first appearance in the Rurouni Kenshin series, Aoshi and four of his combat-oriented subordinates are acting as bodyguards and enforcers under the employ of Tokyo entrepreneur Takeda Kanryū.

The Oniwaban are first introduced in the Tokyo Arc as a gang of highly skilled mercenaries, each with a particular set of specialized skills. They are hired by Takeda Kanryu to secure his opium trade, they eventually become involved with Kenshin's group after they try to infiltrate Kanryu's mansion. The Oniwaban prove to be a even match for the group, though ending up in defeat. They eventually give their lives in a suicide march to protect their leader Aoshi from Kanryu's gattling gun and disable it, allowing for Kenshin to defeat Kanryu.

During the Kyoto Arc the Kyoto Oniwabanshū are introduced, along with Misao and Okina. They assist in the Battle of Aoi Ya.

Aoshi and Misao return to help defeat the Six Comrades, and later on, the Sūshin. During this Arc, Aoshi sometimes dons the standard shinobi outfit.

Shinomori Aoshi- The prodigious leader of the Oniwaban during the Meiji restoration, having attained this pinnacle at age 15. A master kenpoist and even stronger swordsman that excels in offense and defense.

Kashiwazaki Nenji- Usually known to his subordinates as Okina, known to be the only member who could fight the former leader of the group evenly. He passes up the offer of succeeding his adversary to make way for the genius youngster Aoshi, who greatly surpasses his skills later.

Han'nya- Mutilated his face purposefully in order to take on any disguise, he wears a mask and uses steel claws to assist him in hand-to-hand combat, using optical illusions to confuse his opponents.

Shikijō- Enhanced through the usage of performance-enhancing drugs, he serves as the group's strong man. Said to be Aoshi's second in command.

Hyottoko- A human flamethrower, his teeth are replaced with flint in order to ignite a spray of oil from a bag in his stomach.

Beshimi- A man of short stature, he is a specialist in poison darts.

Masukami- Nicknamed Omasu, she helps run the Aoi-Ya, assists Okina, and serves as Misao's caretaker. She wields two discs that she uses as a weapon or a shield.

Kuroko (Restoration only) - an ex-onmitsu of the Oniwabanshū during the Edo period, Kuroko left the Oniwabanshū some time after the start of the Meiji period, becoming the masked mercenary Gein.

The Tokyo Oniwabanshu, led by Aoshi.

The Kyoto Oniwabanshu, led by Misao.