A young employee at the Akabeko, Sanjō Tsubame becomes rather close to Yahiko during his tenure at the restaurant and eventually becomes closer to all of the Kenshin-gumi as she slowly becomes Yahiko's sweetheart. A timid, kindhearted girl by nature, Tsubame is often rattled by the goings-on surrounding her new friends but begins to play a supporting role as time goes on. Her family were servants of Nagaoka Mikio who forced her to steal before Yahiko stopped him.

She plays a minor role in several of the story arcs. Until the Jinchuu-Hen o jinchuu arc, she takes a more active role.

After the explosion of the Akabeko restaurant, Tsubame lived in the Kamiya Dojo. After the first night of the Jinchuu, she was worried, because Kenshin didn't come back. She also thought Kaoru and Himura deserve to live together and happy.

When Kenshin enters a living hell after the supposed death of Kamiya Kaoru at the hands of Yukishiro Enishi, Tsubame was deeply troubled and after she visited by Yahiko and departed to the fight with Kujiranami. She pleads for Kenshin to help Yahiko fight back against one of Enishi's abandoned allies and bring Kenshin back into the world of the living. Later she was seen by Yahiko's side nursing him.

At the end of the series at the age of 15, she is saved from a group of Yakuzas by Yahiko. After, Yahiko complains about Tsubame's outfit, which is the new Akabeko's uniform. She invites him to lunch as a reward for saving her.

In the OVA, Tsubame and Yahiko have a child.

In the Rurouni Kenshin live-action film, Tsubame is among the victims of opium poisoning. 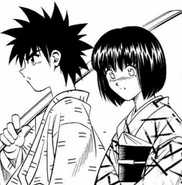 Tsubame pleads Yahiko not to risk his life, battling Kujiranami Hyōgo, who's gone berserk on Tokyo.

Tsubame pleads for Kenshin's help, who at that time, has exiled himself in Rakuninmura.
Community content is available under CC-BY-SA unless otherwise noted.