Derek Stephen Prince (Bang Zoom!!)
Kirk Thornton (Sony)
David Matranga (New Kyoto Arc)
Sawagejō Chō (?) is one of Shishio's Juppongatana. He lives in the Kansai district, so he is the first to arrive when Shishio summons the Juppongatana to Kyoto. His nickname is "Cho the Swordhunter" because his goal is to use every kind of sword in the world, and his favorite type of sword are the ones made by Shakku Arai. After Shishio's defeat, he works for the police, and helps with the Enishi case.

A bloodthirsty, yet arrogant and foolhardy assassin, Cho proves to be nowhere near challenging when he fights using his first pair of swords, having all four destroyed in an instant. However, though he is laughably slow and clumsy, compared to the Himura Kenshin's godspeed, he is a master of maneuvers when it comes to his elastic longsword, and he can pull off circus-like tricks using his scabbard, sheathing it in mid-air at a whim (though compared to Kenshin, this skill also borders on useless).

Sagara Sanosuke taunts him at one time, calling him the weakest of the Juppongatana. However, this isn't really the case, since Sadojima Hōji does mention that if the Juppongatana go up against Kenshin and his allies, those among them who are weaker than Cho will most likely lose their lives, implying Cho ranks only behind the three that Hōji recommends for this task instead.

Katana: Cho has two katana strapped on his back. They are without name and the first to be broken in Cho's fight with Kenshin.

Renbatō: (?) (Chain Blade Sword) One of Shakku's earlier swords. Two katanas are connected at the hilt to form one sword with two parallel blades. The idea behind this is, even if the cut doesn't kill you, two cuts made so close together can't be stictched up and the victim will die by blood loss or of infection. While it would be a force to be reckoned with, because Cho is rather ungainly and slow Kenshin manages to intercept his swing and break these pair of swords with ease as well.

Hakujin no Tachi: (?) (Long Sword/Tachi of the Thin Blade) One of Shakku's last swords. It's very long and was made as thin as possible. The tip is weighted so the wielder can control the directon the blade flies with a flick of the wrist which makes dodging by a small margin dangerous. Cho wears this concealed around his waist under his clothes, only using it when his opponent proves worthy of it. His skill with this sword in particular is formidable, so much that he even injured Kenshin's leg by surprise and managed to also dismantle his remaining weapon, the scabbard of his old Sakabato.

Ryosuke Miura was cast as Cho in the two-part Kyoto arc movies. 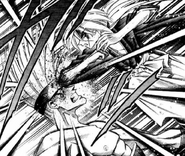 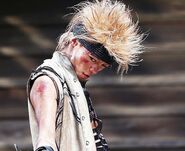 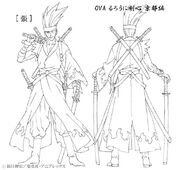