Takani Megumi is a secondary character in the Rurouni Kenshin series and the main cast's primary physician after her appearance. Born into a prominent and dedicated family of doctors in the province of Aizu, Megumi was left alone after the death of her father and the disappearance of her mother and older brothers. After becoming a medically proficient in her own right, she became the assistant of a doctor secretly making drugs for the industrialist Takeda Kanryū. Attempting to escape, Megumi was tailed by Kanryū's men and fled to the protection of Himura Kenshin and the Kamiya dojo. Though hoping to journey back to Aizu to find her family, Megumi remains on call in Tokyo after her freedom is restored in order to support the people who rescued her.

A very lovely young lady, Megumi carries herself with a womanly grace. She is always seen wearing red lipstick in contrast to her pale complexion and her shiny black hair hangs straight and neat to mid-back length with layered, shoulder-length strands hanging casually around each ear. When out of her doctor's outfit and cap, Megumi dresses in plain but pretty kimonos, usually in pastels of blue and/or violet.

Megumi is known to act flirtatious around men she is attracted to, such as Kenshin. Due to this, Sanosuke and Kaoru call her a "vixen" (or Fox Lady in the anime). However, when the situation becomes serious, she casts aside her playful personality and puts all her focus on the task at hand, as seen when treating her patients. While held captive by Takeda Kanryū, she had a solemn, almost depressed disposition. She holds guilt for the lives she indirectly killed or destroyed because she was forced to make opium for Kanryū, to the point she attempted to murder him and then herself to atone. She has a strong love for her family, which was her only motivation to keep on living when Kanryū held her captive. Due to the years of slaving under Kanryū, she held a negative outlook on life, doubting Kenshin and Sanosuke could defeat the Oniwabanshū but at the same time was grateful for their help and never let go of her strong dedication to being a doctor, using her knowledge to save Yahiko from poisoning. She has since become a doctor to atone for the lives she indirectly killed. After being saved and freed from Kanryū's control, she develops a more positive outlook on life and becomes dedicated to saving the lives of others. She also has a strong loyalty to her friends, often being there to tend to their wounds and worrying for their well-being. Her love for Kenshin is deep, as he helped her become a doctor, but understands that her feelings won't be reciprocated

She played by Yu Aoi who is best known for her role for playing Hagumi Hanamoto in Honey and Clover, thumb|174px|link=File:Aoiyu.jpgand as Hana in Hana and Alice. In the movie, she worked with Takeda Kanryū as doctor after witnessing her co-workers' murders. She was pursued by Kanryū for her abilities to create opium and managed to flee to the Kamiya Dojo, where she met the Kenshin-gumi. While at the dojo, she headed the efforts to heal those affected by the poisoned well water.

Megumi is an extremely skilled physician trained in both classical Japanese medicinal practices like moxibustion as well as, more impressively, modern Western practices like toxicology. She is very adept at identifying poisons and determining cures and can also treat broken bones and lacerations.

According to Nobuhiro Watsuki, Megumi's visual design is based on the young version of the grandmother character from the manga Cyborg Ji-chan G by Takeshi Obata, Watsuki's former mentor.

Watsuki has claimed that his intent was to create Megumi as a "mature woman" character with whom Kaoru could interact and that he did not have any specific character model in mind at her inception. She first appeared in Watsuki's stand-alone End-of-Volume Special 2: "Rurouni Meiji Swordsman Romantic Story (2)" as "Kamiya Megumi", the elder sister of Kamiya Kaoru and Kamiya Yahiko, but her role in that piece was much smaller and Watsuki himself describes her as having a "lighter quality" than in the Rurouni Kenshin series, where her "earthy quality" would make more of an impression on the readers and her determination would be the vehicle for Watsuki's intended expression of "redemption for one's crimes".

Unfortunately, Watsuki felt some disappointment in the resultant character by the time Volume 4 was published, believing that he had failed to portray her in the manner he had intended.

Megumi in the live action film. 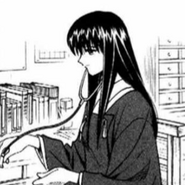 Megumi in the Manga series. 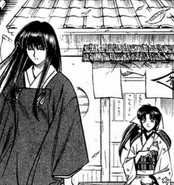 Kenshin revealed his past to Megumi 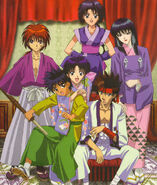 Retrieved from "https://kenshin.fandom.com/wiki/Takani_Megumi?oldid=17420"
Community content is available under CC-BY-SA unless otherwise noted.