4
Rurouni Kenshin: Trust & Betrayal, known in Japan as Rurouni Kenshin: Tsuiokuhen (追憶編 Recollection or Reminiscence?), is a four-part OVA (Original Video Animation) that serves as a prequel to the Rurouni Kenshin anime series. It was released in Japan in 1999, and was directed by Kazuhiro Furuhashi and written by Masashi Sogo. Its initial English dub release was distributed by ADV Films under the title Samurai X: Trust & Betrayal. Later on, the OVA was re-released as a compilation movie (labeled as a "Director's Cut" by ADV Films) that features an altered music score and an extended ending sequence.

The OVA is based on the Remembrance Arc (chapters 165 to 179) of the Rurouni Kenshin manga, by Nobuhiro Watsuki. It chronicles the story of Himura Kenshin during his role in the Meiji Restoration as a legendary assassin of the Imperialist cause, while also revealing the origins of his famous cross-shaped scar and exploring his relationship with his first wife, Himura Tomoe. Kenshin's first encounters with his master, Hiko Seijūrō XIII, and his rival/future ally, Saitō Hajime, are also depicted.[1]

Since its release, the OVA has received near-universal critical acclaim from various critics and publications for manga, anime and other media. It remains highly popular among anime fans and it is widely credited as one of the greatest OVAs of all time.[

When a raid of murderous bandits ambush a caravan of travelers in 1850s Japan, a young red-haired boy named Shinta becomes the sole survivor of this massacre when a passing swordsman slays all of the bandits before they can also kill the boy. The swordsman, known as Hiko Seijūrō, is a master of the strongest of all sword forms, Hiten Mitsurugi-ryū. Hiko is impressed when the boy buries all of the dead (including the bandits), and decides to take Shinta as his apprentice. He then renames the boy Kenshin, a name he considers to be more appropriate for a swordsman.

After several years of training, Kenshin leaves his master (against Hiko's wishes) to take part in the Bakumatsu revolution poised to overthrow the Tokugawa Shogunate. He joins the Chōshū Ishin Shishi and soon works for their leader, Katsura Kogorō, as an assassin. Kenshin quickly becomes a hardened killer, feared far and wide as the Hitokiri Battōsai. In 1864, during a successful nighttime assassination in the streets of Kyoto, he kills a bodyguard named Kiyosato Akira. This encounter with Kiyosato leaves Kenshin with the first half of his cross-shaped scar on his left cheek. After killing a fellow skilled assassin sometime later, Kenshin meets a beautiful woman named Tomoe who, unknown to him, was Kiyosato's fiancee. Kenshin contemplates killing her for witnessing his actions, but decides to instead take her to the inn that he and other swordsmen of the Chōshū clan are residing. Tomoe agrees to stay and work as one of the inn's servants. Katsura suspects a spy among the Chōshū after Kenshin informs him of the assassin he killed. During this time, Kenshin and Tomoe grow close to each other as she helps him slowly regain his humanity after realizing how tortured he is internally over his role as an assassin.

After the Ikedaya incident in Kyoto, Katsura arranges for Kenshin and Tomoe to hide in the remote village of Otsu as a married couple in order to avoid suspicion. After a few months living in peace together, Tomoe's brother, Enishi, comes to visit their house and secretly reveals to his sister that the Shogunate agents assigned to kill Kenshin are close by, and that they will soon avenge her dead fiancee. Tomoe sends Enishi off, feeling ill at ease. It is by this time that Tomoe has truly fallen in love with Kenshin (and he with her), and no longer seeks revenge. The next morning, Tomoe leaves their house while Kenshin is still asleep and she tries to deceive the Shogunate men into giving up their pursuit of Kenshin; when this fails, she unsuccessfully attempts to kill their leader.

After his wife's disappearance, Kenshin is visited by a comrade who tells him that Tomoe is the spy they were looking for and that she is meeting at that moment with her co-conspirators. He also reveals to Kenshin who Tomoe's fiancee was. Kenshin, however, is unaware that it is this comrade of his who is the real spy among the Chōshū clan. While heading to Tomoe's location, a heavily-shocked Kenshin faces and kills three of the four Shogunate agents but becomes badly injured due to his traumatized state. While Kenshin is fighting with the agents' leader (a fist fighter), Tomoe steps in between the two to protect Kenshin from the leader's killing blow. This allows Kenshin to kill his enemy but, in doing so, unintentionally strikes down Tomoe with his sword as well. Before she dies in her husband's arms, Tomoe uses her dagger to cut the second half of Kenshin's cross-shaped scar on his face.

Kenshin is devastated by Tomoe's death and later vows to never kill again in honor of her life, after bringing about the new age desired by Katsura for Japan. Katsura informs Kenshin that he had a new assassin kill the real spy and take over all further assassination jobs for the Chōshū clan, but requests that Kenshin now serve as a guerrilla swordsman to help fight the Shogunate more directly on the front lines. During these final years of the Bakumatsu, Kenshin clashes with the Shinsengumi captains Okita Sōji and Saitō Hajime, among others, while Tomoe's spirit is seen comforting him in his sleep. After the Shogunate's final defeat in 1868, the Hitokiri Battōsai vanishes and leaves his blood-stained sword behind.

Sometime later, Hiko Seijūrō returns to the gravesite where he first met the boy Shinta and he notices that one of the grave-markers now has Tomoe's blue shawl wrapped around it. Despite having never met Tomoe, Hiko bows his head in sadness as he seemingly understands the tragedy his apprentice has experienced. He then looks up to the sky while recalling the moment he gave Shinta the name Kenshin.

Differences from the Manga[]

Trust & Betrayal features several differences from the flashback chapters in the Rurouni Kenshin manga. Perhaps the most obvious change is the OVA's lack of comic relief that the manga and anime are famous for, which is largely due to the OVA's more "realistic" style and design. Other differences include: 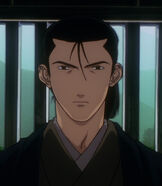 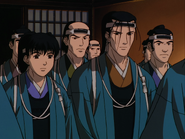 Kenshin and Tomoe in love.