Woo Heishin is a Shanghai crime lord and Yukishiro Enishi's second in command of his organization. His haughty attitude eventually irritates Enishi so much that he threatens to kill him along with all his soldiers unless he gets out of his sight. Although each of his 4 personal bodyguards (the Su Shen) end up losing to Saitō Hajime, Shinomori Aoshi, Sagara Sanosuke and Myōjin Yahiko respectively, they prove themselves to be powerful opponents.

After the Su Shen are defeated by Himura Kenshin's allies, Heishin tries to retreat but Enishi arrives on the scene and sees that he still has not left the island and so, beats him to a bloody pulp. A fight ensues between Kenshin and Enishi. After this combat, Heishin re-awakens and tries to shoot Kenshin, but Kamiya Kaoru comes in his way. Upon seeing Kaoru protect Kenshin, Enishi is immediately reminded of the time his sister Yukishiro Tomoe threw herself in between Kenshin and Tatsumi in order to protect the former and died as a result. This prompts Enishi to stop Heishin in his tracks by punching him in the face. He proceeds to try and kill Heishin, but Kenshin tells him not to do it, adding that, if Enishi continues to murder as he has so far, he'll lose Tomoe's smile forever. The Rurouni then thanks him for protecting Kaoru, but Enishi collapses and replies that the only one he truly wanted to protect was his sister. 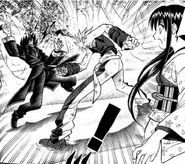 Enishi protects Kaoru from Heishin.
Add a photo to this gallery
Retrieved from "https://kenshin.fandom.com/wiki/Woo_Heishin?oldid=14720"
Community content is available under CC-BY-SA unless otherwise noted.