Michael McConnohie (Bang Zoom!)
Daran Norris (Sony)
Yūkyūzan Anji ( ?) was one of the Juppongatana, an organization under Shishio Makoto's orders.

Anji is, above all, striving for righteousness. Every action he takes is to better the world in his view, though he believes that this may only be done through constant destruction and rebuilding. He appears very patient and thoughtful in a fight, not prone to rash actions or decisions.

Anji used to be a peace-loving Buddhist monk who believed that violence was never to be a resort; however, when his temple was burned down and the children he cared for murdered by the imperialists, his anguish, bitterness, hatred, and rage transformed his beliefs. No longer accepting that Buddha could rightfully choose who lives and dies, he takes the decision into his own hands.

Even after his fall, Anji keeps a fair personality. He refuses to allow innocent people to be hurt, and goes as far as to physically confront Uonuma Usui when the latter attempted to kill Misao, despite the fact that Usui was decidedly stronger. He teaches Sagara Sanosuke the Futae No Kiwami ability in an effort to help the young man get stronger, though he promises to kill him if he cannot learn it within the allotted time limit (i.e. a month, although Sano offers to change the time frame to a week instead). Afterwards, when he believes Sano to have died in vain, in an attempt to to learn the Futae No Kiwami, he wishes to give him a proper burial, but Sano awakens and to Anji's surprise, he demonstrates that he had grasped the Futae No Kiwami.

Upon Kenshin's party's arrival at Hiei, Komagata Yumi expressed her concerns that Anji's acquaintance with Sanosuke might get in the way. Shishio himself did not deny such possibility. He even reinforced her statements that Anji is indeed the most merciful out of the Juppongatana, though at the same time remarked that his wrath had overshadowed his merciful nature.

Anji developed a technique which he named Futae no Kiwami (Double Layer Limit, Mastery of Two Layers, or Two-fold Extremity). This allows him to strike an object quickly, with only milliseconds between each attack. He completely destroys the object, letting the first strike dissipate the natural resistance of the object and the second strike destroying the object while it is weakened. Anji is able to use this technique with, not only his fists, but also with his head, elbows, knees and feet.

Anji also created some techniques derived from the Futae no Kiwami, the Kiwami Hazushi (Extremity Release), which negates the effects of the first. It is done by punching your own body in the opposite direction of the opponent’s Futae no Kiwami.

Another is called the Touate (Distant Hit) which is done by thrusting a small blade into the ground and causing the Futae no Kiwami to occur in the surrounding area of the user.

Anji is a fallen Buddhist monk and a master of Kenpo. He used to live in a temple dedicated to the sect of Jodo-shu and its patron buddha Amida Butsu, along with five orphans who were very dear to him. Because of the anti-Buddhist feelings spreading through Japan upon the rise of the new Meiji Government and the new system of government sponsored civil funding to remote towns and villages, the town's mayor discussed in depth to Anji of the situation at hand, as the orphanage was seen to be a blight on the town's standing by both the people and the government.

Despite planning on leaving town with the youths to different parishes in Japan the next day, the mayor instead decided to burn the temple where Anji lived, regardless of the fact he and the orphans were still in there in hopes of gaining a higher standing for monetary aid. At the night that the temple was being burned to the ground, the children were trapped inside with Anji too far away to help. When he got to the temple, he was knocked unconscious and when he woke up, everything was gone and the orphans dead. He would later avenge this disaster 5 years later, first by killing the men who set the fire. The mayor begged for forgiveness, saying that what had happened wasn't his fault, but Anji killed him by crushing his head.

Soon after, he continued his path of vengeance to see the downfall of the Meiji Government, and it was presumed that he took quests to achieve the powers of Horiki, or Buddhist magic, seeking out different sects of Buddhism throughout; however, he grew disillusioned at how the powers of Horiki were that of fairy tales, and sought his own ways to achieve the world's salvation. At some point during those last 5 years, he eventually became acquainted with Shishio Makoto and joined his ranks due to a shared cause, and developed the Futae no Kiwami.

Anji's first appearance is when Sanosuke is heading towards Kyoto but gets lost in the woods. He finds Anji training his technique, the Futae no Kiwami, and asks Anji to teach it to him. Sanosuke manages to learn the technique in one week and as he leaves, Soujirou appears to tell Anji that the Juppongatana are being summoned to Kyoto.

He is next seen in Shishio's compound along with all the other Juppongatana, except for Cho. The next evening he is sent to central Kyoto along with several other members of the Juppongatana to help with the preparations to Kyoto's Grand Fire.

On the day that Kenshin goes to Shishio's compound with Sanosuke and Saitō, Anji becomes their first opponent. Anji and Sanosuke fight, and Sano ends up winning.

After Shishio's defeat, Anji is also offered an 'under-the-table' deal like the rest of the Juppongatana, which he refused. He turns himself in to the police and is sentenced to spend 25 years in jail.

This character had been almost entirely developed before the publication of Rurouni Kenshin. As the story was progressing, there was a need to make Sanosuke stronger, so Anji appeared as a teacher and a strong opponent. His visual model was the lead vocalist of a punk band called Angie.

It was revealed in January 2014 that Tomomi Maruyama played Anji in two movies. Unlike in the movie, Anji did not train Sanosuke and only revealed to him about the background of his code-name while battling him.

Anji in his days as a humble monk, known for being far too kind and compassionate.

Anji agrees to teach Sagara Sanosuke the Futae no Kiwami.

Sano learns the Futae no Kiwami within a week and bids farewell to Anji.

Anji and Sano meet once again, this time as enemies. 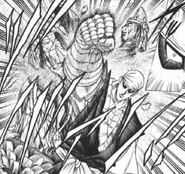 Anji shows his level of power.

Anji serves his 25-year prison sentence, to atone for his crimes.

We can find Anji:

Retrieved from "https://kenshin.fandom.com/wiki/Yūkyūzan_Anji?oldid=18087"
Community content is available under CC-BY-SA unless otherwise noted.