Yamagata Aritomo is Lord of the Imperial Meiji Army. In the 10th Year of Meiji, he makes his way to Tokyo after hearing that Hitokiri Battōsai has gone off on a killing spree in the city and has been arrested. After learning the truth that the murders were committed by a fraud, he asks Himura Kenshin to join the police force, an offer which Kenshin bluntly refuses, saying that he wishes simply to protect the people around him and seeks no reward for having shed the blood of countless people.

In the Rurouni Kenshin live action film he is played by Eiji Okuda. 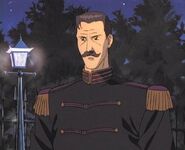 Add a photo to this gallery
Retrieved from "https://kenshin.fandom.com/wiki/Yamagata_Aritomo?oldid=16567"
Community content is available under CC-BY-SA unless otherwise noted.