Edit
watch 01:36
We're Getting Mutants in the MCU - The Loop
Do you like this video?
Play Sound

Rebecca Davis
Yukishiro Tomoe ( ?) (later Himura Tomoe) was the daughter of a low-ranking samurai family that remained on the side of the Bakufu during the Meiji Revolution and was engaged to her childhood friend Kiyosato Akira. However, when Akira was slain by the Hitokiri Himura Battōsai (a.k.a. Kenshin), Tomoe leaves home and joins the Yaminobu in order to avenge her fiancee. However, after tracking Battōsai down, she slowly falls in love with him instead. As the Yaminobu close their net around Battōsai, Tomoe intervenes and, saving her new husband's life, becomes a casualty herself - cut down by Kenshin's own sword. As such, Tomoe becomes Kenshin's primary motivation in his oath to never take another life following the end of the revolution and devote himself to protect the innocent without bloodshed.

Tomoe was a beautiful young woman with jet-black hair and eyes. She is thin and wears a white kimono with a purple shawl (colored light blue in the Trust & Betrayal OVA). She is constantly seen with a serene, almost sad look on her face, and rarely sports an expression of high emotion (for instance, happiness, anger, etc.).

The initial image of Tomoe as she is introduced into the series is blank and quite apathetic. This could be due to the death of her fiance, Kiyosato Akira, who is killed before Tomoe appears in Kenshin's flashback. She says that she's always had trouble expressing herself, not even smiling when Kiyosato proposed to her despite her joy. As such, she partially blames herself for his death. Though when interacting with her brother, Yukishiro Enishi, she becomes affectionate and shows more of her emotional side.

After spending time with Kenshin, Tomoe begins to open up to him and even cries in his arms after confessing how she had tried to hate Kenshin for the murder of Akira. After Kenshin promises to protect the happiness that he has given her, Tomoe finally smiles at him. "This man stole my happiness from me...and gave me a new happiness. Farewell... my second love..." These are her parting words to Kenshin.

He is her younger brother by roughly nine years. Tomoe became a mother-figure to Enishi as their mother died shortly after giving birth to Enishi and became very dear to him as a result. Despite appearing emotionless around most people, she seemed to allow herself to become more expressive around her brother. Tomoe seemed to love her brother dearly, however, she noted that he was a very emotional boy and could sometimes be a problem. After her death, Enishi lost all sensee of himself and had only one thing in his heart: to get revenge on Kenshin. He constantly saw her in his mind, believing that he could do anything if she smiled at him. Once she stopped smiling at him, he lost confidence and it eventually led to his defeat by Kenshin. Only after reading Tomoe's diary, which was given to him by Kamiya Kaoru, did Enishi realize Tomoe's true feelings for Kenshin. For better or worse, she was an extremely influential person in Enishi's life and seemed to be the only person he ever properly cared about.

Akira was Tomoe's childhood sweetheart and fiancee whom she was going to marry before the former was killed by Kenshin. Not much is known about their relationship, but she was devastated upon his death and went as far as to travel to Kyoto to avenge his death.

Tomoe has shown no combat abilities.

Tomoe was the first child of a samurai and low-level bureaucrat of the Tokugawa Shogunate in Edo. Her mother died giving birth to her brother Enishi, which left Tomoe to become a parent figure to her brother who he came to love her as both a sister and a mother-figure. Tomoe met Kiyosato Akira, the second son of another similarly-ranked family as a child. They became childhood sweethearts and planned to get married, which Enishi disliked at first but grew to accept it. However, Tomoe had a tendency to appear outwardly expressionless, which upset Akira, thinking she didn't care. This lead him to join the Mimawarigumi to impress her. One night while guarding Shigekura Jūbei in Kyoto, Akira and his charge were assassinated by Himura Kenshin. Despite being vastly outmatched, Akira was still the first ever to wound the Battōsai by cutting the first half of Kenshin's famous cross-shaped scar on his left cheek.

Tomoe later met Kenshin in Kyoto herself after he killed an assassin sent to kill him. Drunk from a night of binge drinking at the same restaurant Kenshin frequented, she fainted and Kenshin took her with him out of the dark and rainy streets (as it's later revealed, she was to have a hand in his death, making it debatable as to if she was actually drunk, or just pretending to be). While her initial stay at Kenshin's headquarters was welcomed, Katsura Kogorō debated as to whether she was something more than an unfortunate woman Kenshin saved during his night on the town, as her demeanor and attire he could tell was that of nobility. Nevertheless, his partner Takasugi Shinsaku convinced him that she could stay around and help out and ultimately be spared due to being witness to Kenshin's activities. As time went on, Kenshin started to develop feelings for her. As the events of the Ikidaya Incident came to pass when Kenshin and Tomoe were out on a date, Katsura decided to have his current forces scatter for safety due to capturing the attention of the government; including having Kenshin lay low in the countryside and requesting Tomoe to stay with Kenshin. Together, Kenshin and Tomoe lived off the land as farmers, part-time medicine sellers, and most importantly as a married couple with Kenshin fifteen at the time and Tomoe eighteen. For Tomoe, however, this was at first just a ruse as she was originally a spy to find Kenshin's weakness, but she abandoned her mission as she became closer to the kinder, gentler side of him, having fallen in love with him in the process.

Eventually, her younger brother Enishi arrived informing her that the trap for Battōsai was ready; after telling her brother to go home to not be involved with her dirty work, she decided to confront Tatsumi and the rest of the Yaminobu in the Binding Forest to announce her separation from the group. After a final night to embrace Kenshin and write a letter telling him the truth, it was revealed that her superiors intended for them to fall in love so they could create a weakness in Kenshin and take advantage of his love for her. Having inadvertently lead on Kenshin to find her, this nearly succeeded in killing Kenshin after pitting him against the Yaminobu, and upon their defeat, a series of debilitating traps meant to severely weaken and cripple him for the advantage. The final battle standing in the way to Tomoe resulted in Tatsumi and Kenshin charging at each other.

Tomoe, divided at heart of her feelings for Akira and Kenshin, and helpless to halt the Yaminobu from completing their plans, struggled within to act; however, upon realizing the reality of her situation, and that the man she loved was in that moment with her, immediately got in the way and stopped Tatsumi from landing the killing blow on her husband, enabling Kenshin to kill Tatsumi, but cut through Tomoe as well. Before dying, she gave Kenshin the second half of his signature cross-shaped scar on his left cheek. Her death was also witnessed by Enishi, whose hair and eyes turned white and turquoise respectively due to the extreme shock and emotional pain witnessing her death put him through.

Fifteen years later, during Enishi's Jinchū, her image is very often seen by both her brother and Kenshin. To Enishi, she smiles to him at first, which gives him the strength and confidence to defeat his worst enemy. Meanwhile, Kenshin did not see her smile, as he lacked the answer to atone for his crimes and was overwhelmed by the consciousness of sin. However, the Tomoe that lived within Enishi eventually stopped smiling for him, and the one that lived within Kenshin did eventually smile, asking him to take care of her little brother for she was probably no longer smiling at him. This proved crucial in his defeat by Kenshin's hand.

In the live-action films[]

In the first live-action Rurouni Kenshin film, Tomoe appears during a flashback where she broke down and wept at Akira's body, though her face is never shown. Kenshin later mentioned to Takani Megumi that the cross-shaped scar on his face was given to him by a young samurai (Akira) and his fiance (Tomoe). Her appearance is noted by white plum petals, a nod to her perfume in the original story.

Kasumi Arimura portrays Tomoe in the two-part film adaptation of the Jinchū Arc.

Watsuki has stated that Tomoe's appearance and personality were modeled after Rei Ayanami from "Neon Genesis Evangelion", and that his intention for designing Tomoe to have her as a "cool beauty", aka. someone who never reveals her true motives or feelings. He stated that he liked the character and would like to use her again in a later work. 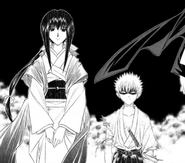 Tomoe's first Manga appearance, in Himura Kenshin's hallucination of her with her younger brother Yukishiro Enishi.

An image of Tomoe in her brother Enishi's mind. 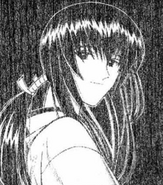 An image of Tomoe smiling in Kenshin's mind, following her death. 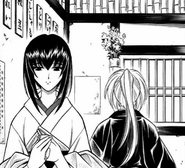 Tomoe and Kenshin about to leave Kyoto together. 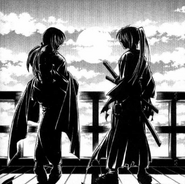 Kenshin asks Tomoe for her hand in marriage. 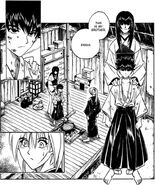 Tomoe introduces her brother to Kenshin.

Tomoe's new happiness in her life with Kenshin as her husband.

Kenshin mistakingly strikes Tomoe, in trying to protect her. 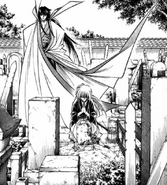 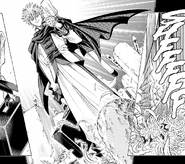 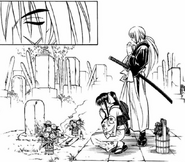 Tomoe introduces her brother to Kenshin in Trust & Betrayal OVA. 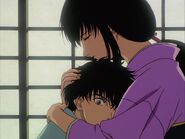 Tomoe embraces Kenshin during their last night together in Trust & Betrayal OVA.

Tomoe and Kenshin in Reflection OVA.

Tomoe and Enishi in Reflection OVA.

Tomoe breaks down and cries over Kiyosato Akira's body in the first live-action film.

Kasumi Arimura as Tomoe in the live-action Jinchū Arc films
Community content is available under CC-BY-SA unless otherwise noted.
Advertisement